The University of Mississippi

The University of Mississippi, affectionately known as Ole Miss, was the first public university in the state and including its academic medical center, UMMC, it constitutes the state’s largest and most research-intensive university.

The University’s path to becoming the flagship university it is today has been marked by two decades of accelerated growth and prosperity. Over the past few years, the university has instituted dynamic new academic programs and greatly expanded its campuses with the completion of multiple major construction projects. The 2018 U.S. News & World Report annual rankings of Best (Undergraduate) Colleges and Universities ranked the University of Mississippi No. 73 in the Top Public National Universities category. The rankings reflect 15 indicators of academic excellence, including faculty resources, financial resources, and undergraduate academic reputation. We have award-winning and renowned programs in accounting, business, creative writing, pharmacy, and law, and are home to the esteemed Sally McDonnell Barksdale Honors College. In 2016, indicating a major milestone, the University was elevated to the Carnegie R1 Highest Research Activity classification — placing it in the top 2.5 percent of colleges and universities nationwide.

Student enrollment at UM Oxford has increased over 40 percent over the past seven years — illustrating the growing reputation and national draw of the university. We were the 10th-fastest growing university among public doctoral institutions over the period of 2005–2015. While more than half of the students enrolled are Mississippi residents, the student population represents every state in the nation and over 80 countries.

A hallmark of the University of Mississippi is student success. The four-year graduation rate is at an all-time high and increased over 5 points between the new freshman cohorts of 2011 and 2012, reflecting the University’s dedication to creating programs aimed at supporting all freshmen in the transition to college life, and particularly nontraditional students and those from underrepresented minority groups. Additionally, improved graduation rates reflect the university’s commitment to purposeful investment in programs that help students reduce or eliminate the financial burden of debt. Retention rates exceed our peer institutions, degrees conferred continue to increase, satisfaction ratings by recent graduates continue to soar, and the value of a UM degree continues to be recognized by employers in all sectors. More impressively, the University of Mississippi has grown in size and academic stature while staying true to its core responsibility of providing all qualifying Mississippi residents with an unparalleled collegiate experience and a pathway to a brighter future.

These institutional successes are wholly due to the collective efforts of nearly 3,000 dedicated and capable faculty and staff at UM Oxford and 10,000 more at UMMC. Key to their success is the environment in which they work and live as well as the resources and infrastructure available to them to fulfill the purpose of the university. The University of Mississippi is the largest employer in the city of Oxford and in Lafayette County, Mississippi. For nine consecutive years, the University of Mississippi has been listed among the Chronicle of Higher Education’s “Great Colleges and Universities to Work For,” making the coveted Honor Roll each of the last two years. The University enjoys broad public and private support to carry out its mission. Alumni and friends have given generously to provide the margin of excellence needed to achieve our current standing as a flagship university. For each of the past six years, private giving has exceeded $100 million — and in 2016, the University received unprecedented private donations totaling over $190 million. 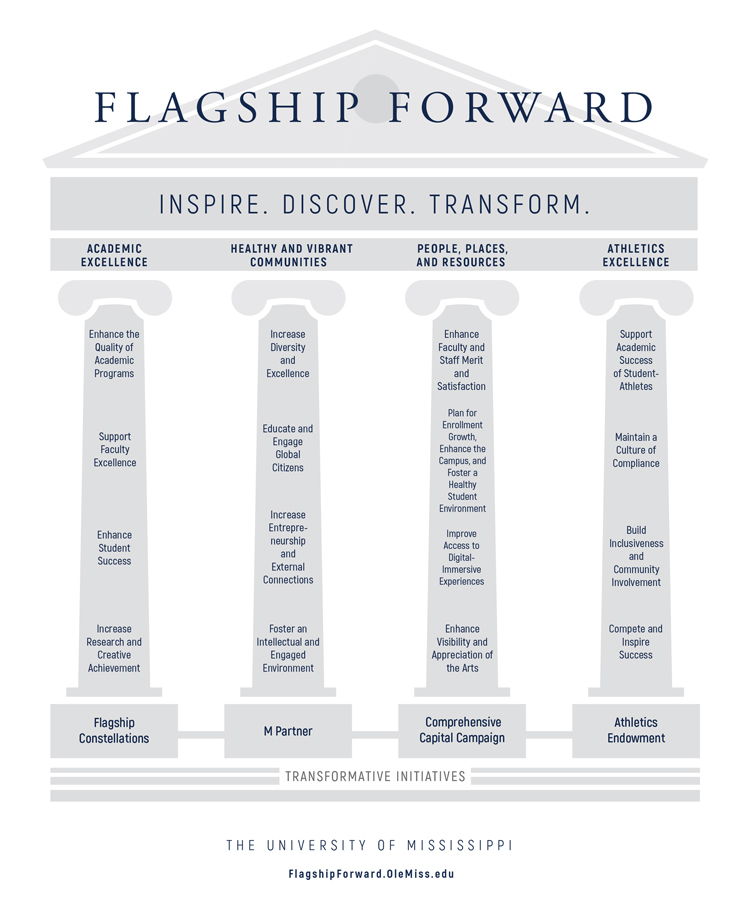